Colour was there from the outset in Daniel Buren’s art. And yet, when he arrived on the international scene, colour was curiously banned. The avant-gardes (essentially minimalist and conceptual art) were content with black and white, or grey, ochre, natural tones or the colour of the materials themselves, regarded as a sign of serious artistic intent. Daniel Buren stood out with his use of bright colours, dubbed “decorative,” a term he readily accepted because “in a way, art has never ceased to be decorative.”

When he started using striped fabric, he was restricted to the narrow range of colours available; but then he began to print or make his own tools. That opened up an infinite range of possibilities, which he readily explored while playing with natural colours, textures, light and so on. Colour took a growing place in his work. Admittedly it has numerous irreducible qualities: it radiates, diffuses, and assumes a certain volume. It can be applied to the stripes but also to other elements in the installation such as walls and partitions. The viewer is then “caught” in colour, which conquers a three-dimensional space.

With a very few exceptions (often for reasons of legibility), the choice and arrangement of the colours is left to chance. The artist’s personal taste does not come into play in the composition. Alphabetical order, the sequence of the colours in the rainbow, a random selection… The colours act not in relation to one another, but within a design, each according to its own characteristics.

“I use colour in the awareness that it is a basic element in the visual arts. It is one of the few elements that artists can use and touch and which, in a way, is pure thought. It cannot be transcribed into music, words, philosophy or anything else. It is raw!” Colour is probably one of the most intriguing and important things in visual art, and a key element in Daniel Buren’s philosophy. 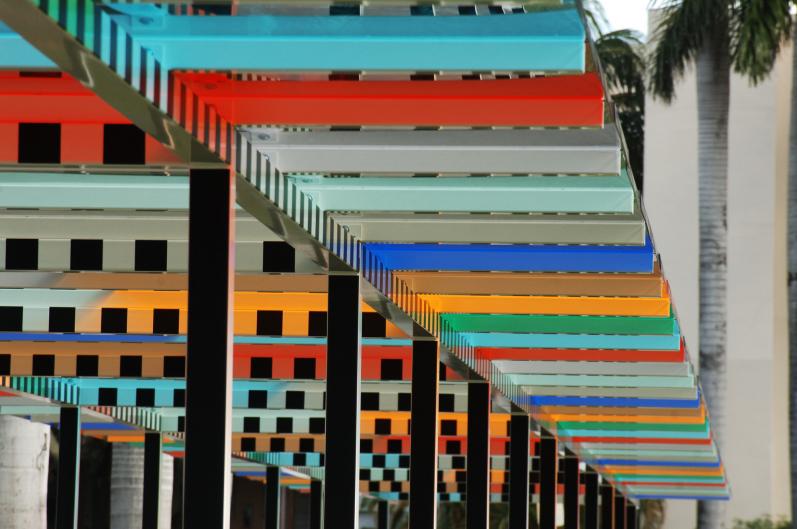