The question of sound haunted the visual arts in the twentieth century, when devices for making, recording, and broadcasting sound were in flux, and yet even now few artists have explored this path.

Daniel Buren experimented with sound from the outset. When he exhibited with three other artists at the Salon de la Jeune Peinture in 1967, a loudspeaker set up in the room they were painting in broadcast a message in three languages: “Buren, Mosset, Parmentier, Toroni advise you to become intelligent!”

As well as actually painting, the artist spoke directly to the spectator and the message was part of the work. Daniel Buren’s voice could be heard in other works, describing actions and reading texts in some of his later videos and performances. But speech is not the only form of sound he uses. It may be music, whether live (with the experimental group Loupideloupe) or recorded. Sound is regularly used in Daniel Buren’s work as a means of measurement (the acoustics of a space gives clues to its volume), or revelation (the ear can attract the eye to something else: for example the sound of water running under The Two Plateaux makes people look into the ditch, or the water running throughout the mill of Counter-current, works in situ and in motion, Albi, 2008).

Sound, as an instrument for revealing the invisible, adds another dimension to the art work. What is heard complements what is seen, and the one cannot be reduced to the other. Daniel Buren uses recorded sound (voices, his own or those of his friends), music, and the sound of the elements and materials. In addition, there is the ever-changing noise of the site itself because its atmosphere is inevitably an integral part of Buren’s work in situ. 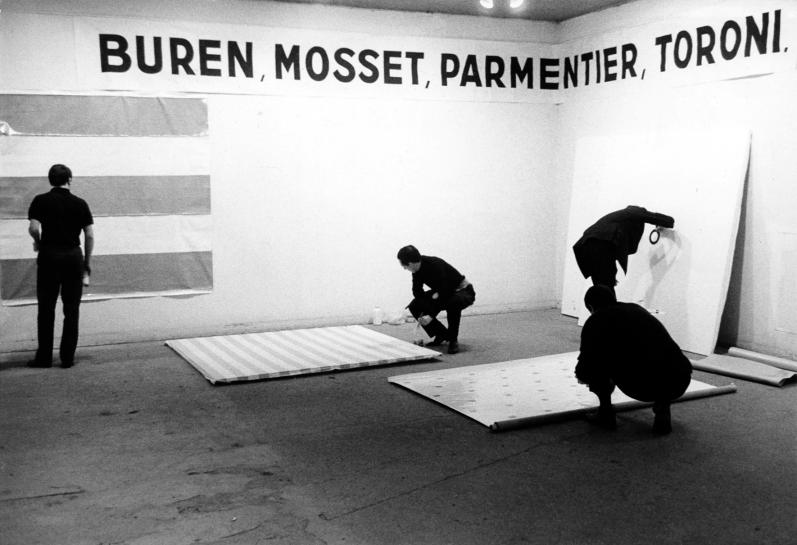