For Daniel Buren, the spectator must be active and explore a work from different angles and the work itself must take this dimension into account: some parts can only be appreciated through movement, and the whole piece may be mobile.

Daniel Buren has explored the possibilities of movement in depth. In 1975, he produced a street ballet on the scale of New York (Seven Ballets in Manhattan). For seven days, seven actors carried placards painted with his stripes instead of the usual slogans, advertising messages or demands. They walked through the streets of a different district each day, following the artist’s instructions and performing his choreography. It was a strange ballet which questioned and muddled the urban landscape, making people look skywards and mixing with the ceaseless activity of the city. It was work in motion.

It contained the familiar ideas of walking about, the inevitable relationship between an object and its context, instability, multiple viewpoints and perspectives. But this time it was the work itself which took charge of the movement and imposed it on the viewer.

Daniel Buren has orchestrated several performances or on-going works in this way. In some the colours are revealed, in others they change with time and motion. These approaches remind us just how close his work is to theatre and even the circus.

Art can no longer bear to be confined to its frame and hung on a museum wall; it leaps out the window and roams about. Movement becomes its driving force: the wind stirs flags and banners and fills sails, buses and trains whisk the works along, escalators become waterfalls, colours and forms escape and keep changing, nothing is established. And the viewer’s eyes and body must move as well. 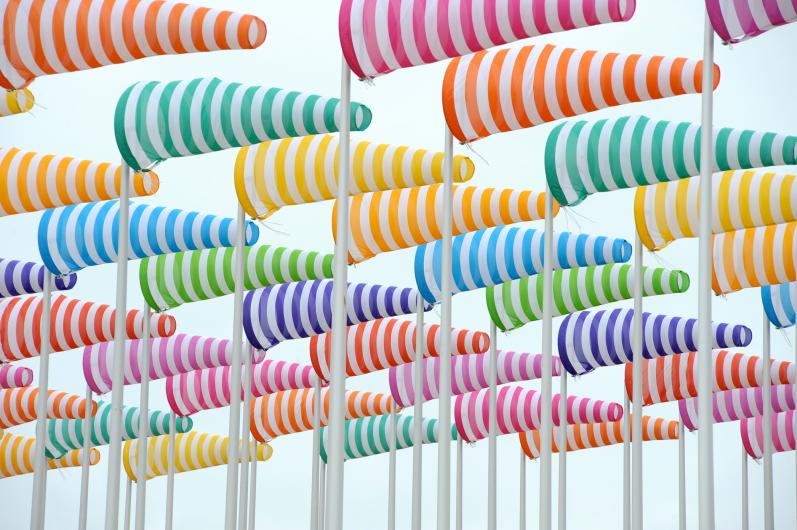